Skip to content
Last week I started talking about an iris print I had been wanting to make. This week I’ll show you how it turned out. I completed this project over the summer, before I moved to Williamsburg.
I began this project by going through my sketches. I eventually settled on three flowers, each drawn between 2017 and 2018. One was drawn in town, while the others were from the Hondo Iris Farm. Once I had the three flowers, I drew them all together in a single composition: 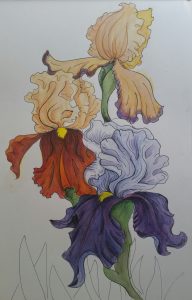 When I was satisfied with the composition, I covered it with tracing paper and drew in the outlines. 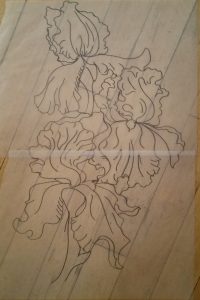 I then applied this outline to the back of a thin sheet of Plexiglas, and drew in the design with an etching needle. I had settled on making this an intaglio print, as that is most akin to drawing, and would allow me to maintain the spirit of the original sketches.
It took me two weeks to finish the design, as the plate measures about 11″ x 14″. Once it was finished, I took it down to the museum. 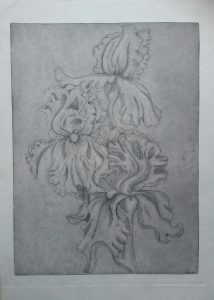 I started printing it in black, but then I grew adventurous and started printing it in different colors, specifically red and blue.
I made a total of six impressions. Half of them I left as is, but the other half I painted in by hand. Each one probably took about an hour to paint, and I made a point of varying the color scheme, allowing me to channel the colors and patterns of the other flowers I’d drawn over the years. 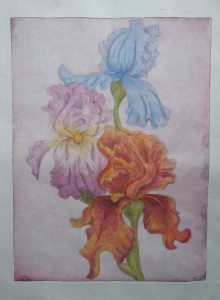 This was a very satisfying project to complete. After thinking about it for years, it was nice to actually finish something.

Manage Cookie Consent
To provide the best experiences, we use technologies like cookies to store and/or access device information. Consenting to these technologies will allow us to process data such as browsing behavior or unique IDs on this site. Not consenting or withdrawing consent, may adversely affect certain features and functions.
Manage options Manage services Manage vendors Read more about these purposes
View preferences
{title} {title} {title}